Winner of a 2021 Gracie Award, nominated by the NAACP for an Image Award, nominated by the Critics’ Choice Association (for Best Sports Documentary), nominated by the International Press Academy (for Best Documentary), and named one of the best films of 2020 by Esquire, A MOST BEAUTIFUL THING is narrated by the Academy Award/Grammy-winning artist, Common; executive produced by NBA Stars Grant Hill and Dwyane Wade along with Grammy Award-winning producer 9th Wonder; and directed by award-winning filmmaker (and Olympic rower) Mary Mazzio. The film chronicles the first African American high school rowing team in this country (made up of young men, many of whom were in rival gangs from the West Side of Chicago), all coming together to row in the same boat. An amazing story. Based on the memoir by Arshay Cooper. A scripted series adapted from A MOST BEAUTIFUL THING is now in development at Amazon Studios with Hill, Cooper, and Mazzio as producers, and the film is currently streaming on Peacock as well as Amazon Prime.

A MOST BEAUTIFUL THING explores not only the safety these young men found on the water (where, as the captain reflected, “we were in a place where we could not hear the sound of sirens”), but the trauma of violence and cyclical poverty, examining how these young men were able to support each other in reimagining a different future for themselves, and how rowing and the water provided the backdrop for that opportunity. These young men came together, after 20 years out of the boat, to race this past summer, not only to celebrate the team’s founding, but the fact that they are still alive.  This is their story.

From a policy standpoint, events are happening with members of Congress, the NBA and WNBA, the NAACP, the Obama Foundation, the Congressional Black Caucus, and professional sports teams (including the Oakland A’s, the Atlanta Hawks, the Miami Dolphins, the Atlanta Falcons, and the Chicago Bulls.)  Several Olympic teams across the globe are supporting the film and activating in profound ways, including the creation of new charitable organizations and initiatives with under-served communities. Universities and athletic directors across the United States (from Morehouse and other HBCU institutions to the University of Washington to Harvard, Yale, and Princeton) are all hosting events because the film resonates deeply with their students. And amazingly, C-suite executives (UPS, Bank of America, Target, JP Morgan, Cargill, Starbucks, Microsoft and others) are hosting conversations around the film, digging into access and opportunity as well as the role and obligation of privilege.

In addition to policy engagement, FILA officially unveiled a gorgeous signature FILA x A MOST BEAUTIFUL THING limited edition shoe with proceeds to benefit the A Most Beautiful Thing Inclusion Fund, a new non-profit effort dedicated to increasing access to the sport of rowing.  In addition, PEPSI and the Miami Dolphins hosted a MOST BEAUTIFUL THING WEEKEND in Miami with an outdoor screening at the Hard Rock Stadium, a performance by one of the young hip-hop artists who worked on the film score, and a 1000 meal give-away to families experiencing food insecurity.  Hudson BoatWorks recently designed A Most Beautiful Thing shell in connection with a remarkable donation of 60 shells to be donated over the next three years to underserved programs, along with oars and indoor rowing machines donated by Concept 2. Pepsi also recently co-hosted with the Obama Foundation and Champs Mentoring, an extraordinary event for thousands of underserved young people in Chicago. Most recently, the NBA and WNBA commemorated Juneteenth with a screening of the film and conversation that was electrifying.

Called  “a movie we all need right now” by The Hollywood Reporter; “an amazing film… uplifting and inspirational and just plain cool” by veteran critic Richard Roeper of the Chicago Sun-Times, and “a great movie” by Rick Kogan of the Chicago Tribune, other press includes The Saturday Evening Post (“The best documentaries lull you into thinking they’re taking you for a nice float on a lazy stream — then abruptly suck you into a chasm of Class 5 rapids that have you holding on for dear life. That’s the kind of ride we get in director Mary Mazzio’s new film…”); The Los Angeles Times (“evocative”), The New York Times (“poignant”); Deadspin (“An Absolute Must Watch”), “incredible” – Good Housekeeping; NPR (“finding hope when we need it most”), and Chicago Now (“one of the most important documentaries of this decade.”) Some of most meaningful press includes columnist Mary Mitchell who wrote about the film from a perspective of a mother for the Chicago Sun-Times, and Gabe Zaldivar writing for Sports Illustrated (“The Perfect Sports Movie for These Astounding Times.”). In addition to the extraordinary press and reviews the film has garnered (with a 100% Rotten Tomato Rating), we are finding that the resonance of the film’s message against the events of the past several months has been extraordinary. In addition, both theTODAY SHOW and NBC Nightly News highlighted the film.

UNRATED. We recommend viewing for ages 16 and above.  The film contains approximately 3-5 minutes of interviews relating to rape as a result of intergenerational trauma, as well as some mild profanity.  NOTE: We will be offering a profanity-free  educational version of the film in the fall of 2021.

NOTE for HISTORY BUFFS: Although this crew (from Manley High School) was the first African-American high school rowing team, the first African-American team was actually a college team which originated in the 1960s and 1970s at Howard University, coached by Potomac Boat Club’s Stu Law.  (Other outreach and community efforts to expand the sport of rowing to young people developed in the early 1990s (Mandela Rowing out of Boston, being among the earlier programs), but much more needs to be done.  In fact, one of Arshay Cooper’s goals is to see a dramatic increase in athletes of color named to the 2028 US Olympic Team. 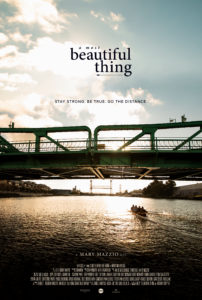